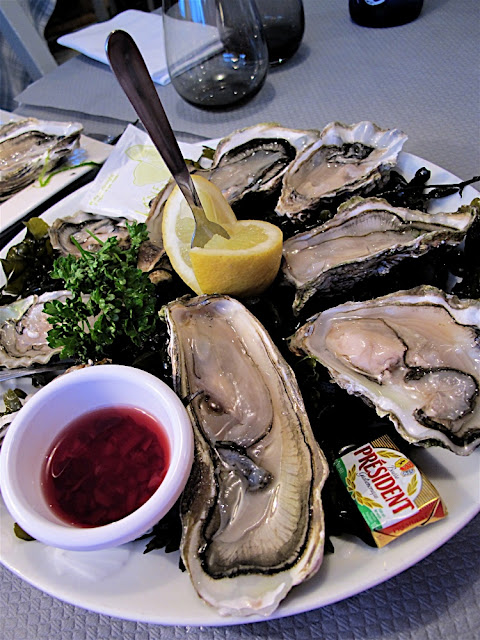 Oysters are alive aren’t they? Just to check I kept pricking these little guys with my fork to watch them flinch. I’m a bit of a sadist like that. 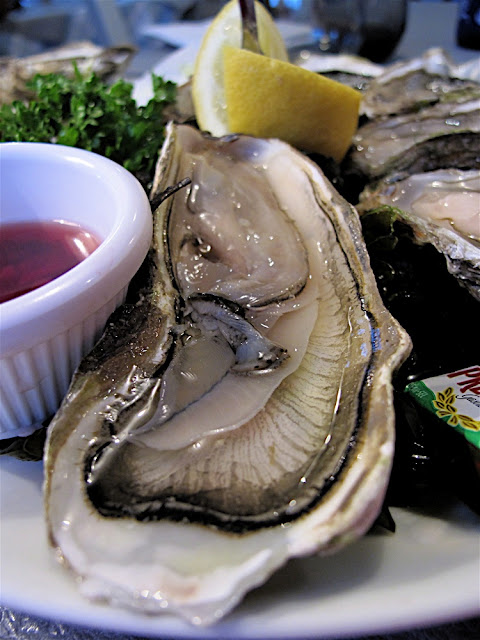 I do like my oysters. As you may recall in this post here. These ones were pretty amazing, not least because they were from one of my favourite restaurants, the humble Skipper on Île de Ré, a sliver of island just off the Atlantic coast of France close to La Rochelle. A chic getaway beloved by Parisians at weekends, apparently Johnny Depp and wife Vanessa Paradis holiday there.
I’ll save my views on how the island has changed since my first visit in 2002 for a later post, for today is devoted to our two meals at this harbour side fish restaurant in the island’s main “town”, St Martin de Ré. 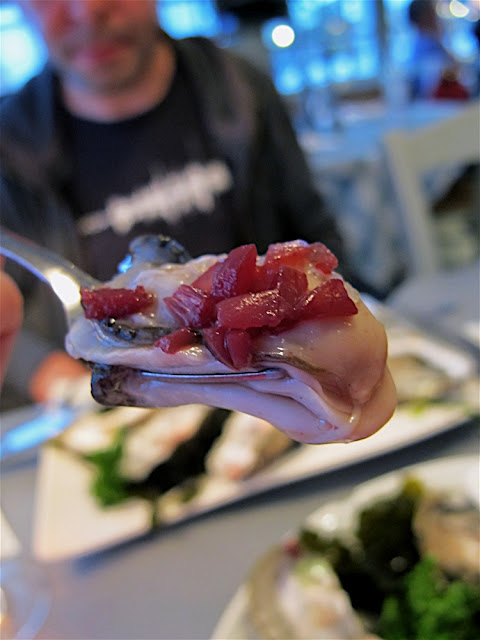 Won’t you just look at that. Pink as my rosé wine, dripping with shallot vinegar. And I really deserved them… 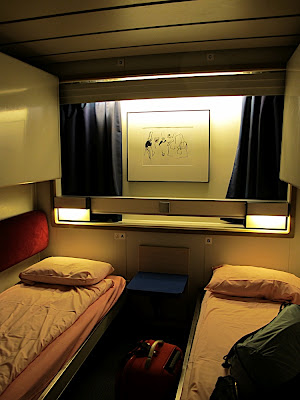 …having spent the previous night holed up in here, a cat swinging cabin courtesy of Brittany Ferries.
Deep in the HULL. I have a phobia of submarines although they are easily avoided in normal life. Mortified by the prospect of a night below the waterline, the only thing that stopped me pacing the upper decks in my pyjamas was the necessity to stop Ted, then dogged by a persistent cough, falling out of his bed opposite.
Pitch black, laid out in close proximity to whole family in confined space. A mausoleum for the living. Hours lurching about in the dark, paranoid about the English Channel being feet away from me. On the floor, Ted is surrounded by pillows, a comfy landing should he wander. But not level with the bottom of the bed. Where he landed, head first, at 4.30am. 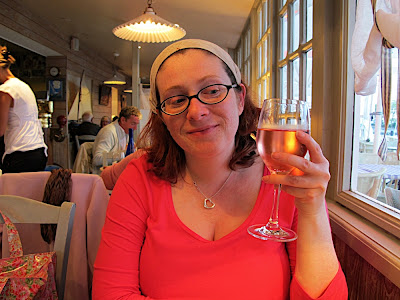 It was the second of six sleepless nights. So if you think I look rough here, imagine what I looked like by Friday. Tonight, even if we only ate out once this week, the rosé wine and oysters were waiting for me. 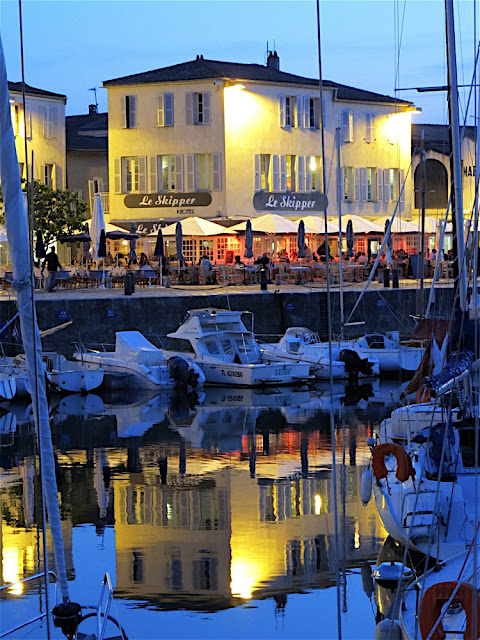 Skipper stands on the harbour in a detached building, a former hotel. We hadn’t eaten there since 2003 but were nostalgic for its splendid seafood platters served in kitsch giant plastic lifeboats (sadly unphotographed – we didn’t order one and it’s not the done thing to photograph strangers’ food, even if you are a crazy food blogger). 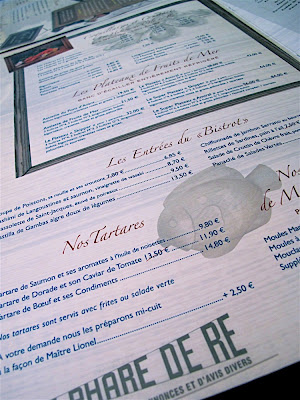 The weak pound was a source of dismay all the week. Not so long ago we ate great 3 course meals in France for around fifteen pounds although inflation and a strengthen Euro mean double this amount is now common. We had two trips to Skipper during our stay, our first and last nights. We ordered from the 29€ menu and the pictures below straddle both our visits. 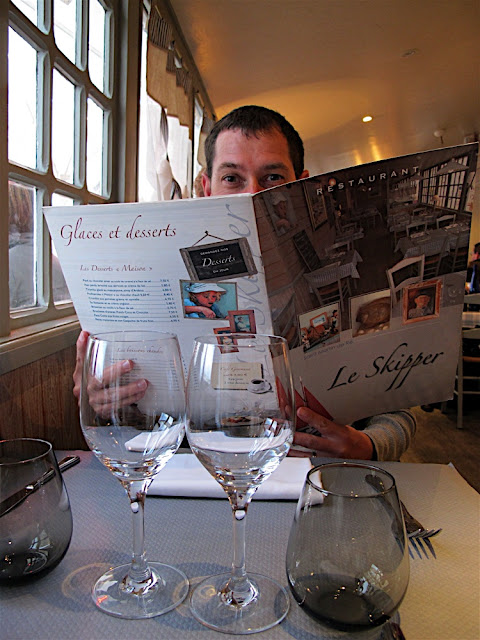 My husband peruses the menu.
He speaks “menu French” but is otherwise limited to “Ou est le vay-say.” 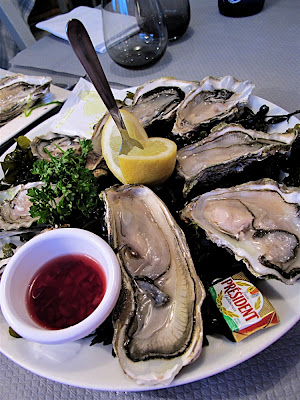 The amazing oysters. They make the ones at the Cadogan Arms look a bit rubbish now. 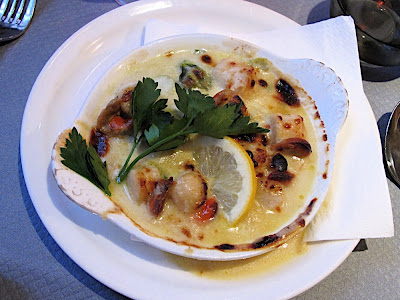 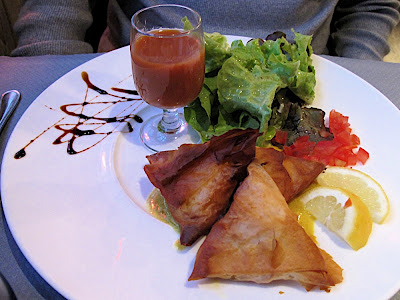 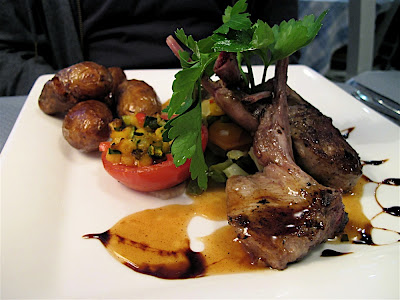 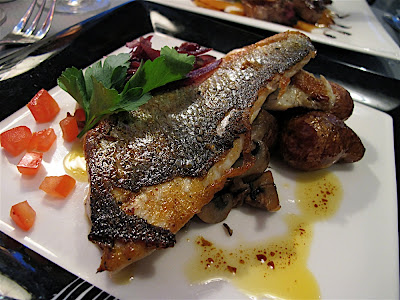 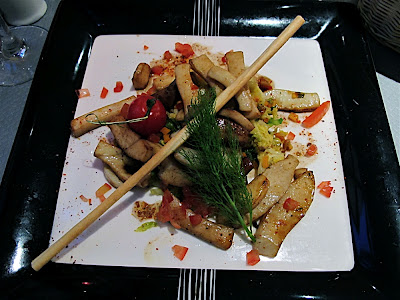 My dish, second visit – squid with balsamic vinegar. Tender fat pieces of squid. Not a trace of rubberiness, anointed with sharp balsamic vinegar and languid olive oil. Artfully (or strangely, depending on your view) adorned with a thin bread stick and served on a very 80s plate. 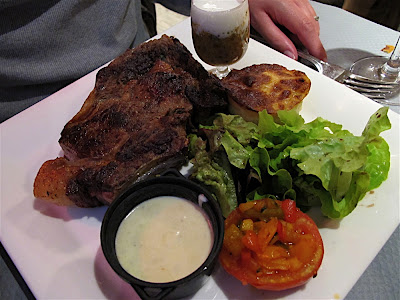 Second visit, my husband’s steak with Bearnaise sauce.
He asked for it “medium rare” but they brought it “English medium rare” i.e. well done. Humph. 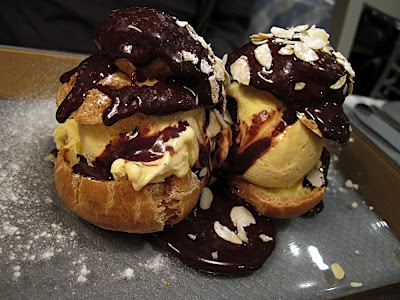 My husband’s profiteroles. He always orders these. Nothing especially special about them. 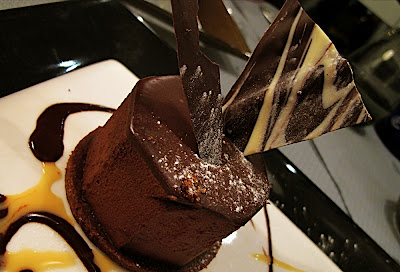 First visit – my unctuous chocolate mousse – with shards of patterned chocolate
and swirls of chocolate and caramel sauce. 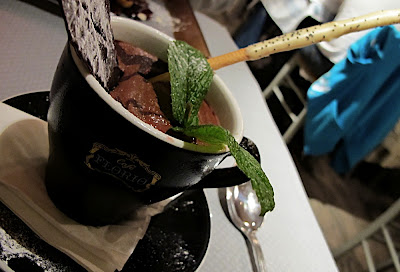 Second visit – Two chocolate mousse. Again decorated with a shard of chocolate and
a bread stick (this time dipped in white chocolate and poppy seeds).
The mousse was beautifully intense, I really lingered over it. I enjoyed the presentation of my desserts at Skipper. 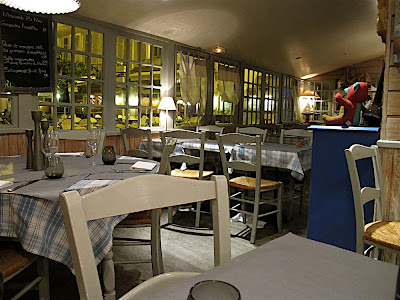 Interior of Skipper – after most diners had left.

After so many years since our previous visit, there were things that disappointed us about Ré. Our return to Skipper was not one of them, the staff are very friendly, the portions generous, the decor cosy and casual. It was reassuring to go back and relive some holiday memories from our pre-Ted years.

There is plenty of atmosphere here, sat across from the harbour boats with their masts chink chinking in the wind. Lanterns and lighthouses decorating the interior without feeling twee.

It will probably be some time before we return to Skipper, but I can relish the memories both distant and recent of the evenings we have spent there. My quest in the meantime is to find oysters this good elsewhere. 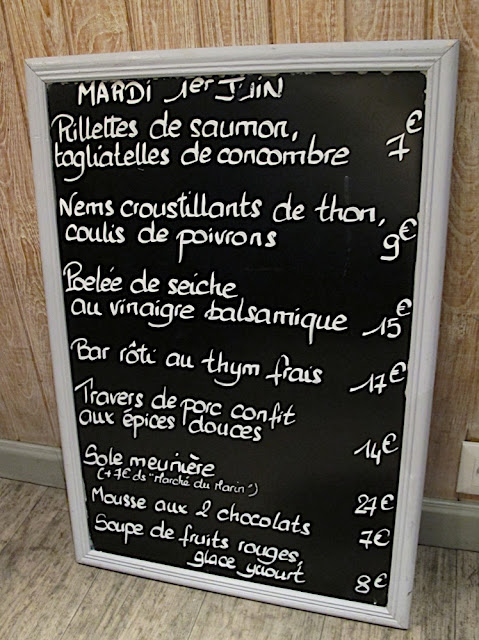 Published in What to eat